Why we are celebrating New Town heritage

Stevenage was developed as the first New Town in the UK in 1946. It promised much: to provide homes, to pull people out of the slums of war-ravaged London and to offer a ­better quality of life.

More than 60 years later the town is still driving forward as home to major international firms like Airbus, MBDA and GSK. It’s also benefiting from a £1bn regeneration scheme, the largest of its type in the east of England, which is designed to reimagine the town and transform it into a place where people can live, work, play and relax. It aims to make use of some of the town’s famous New Town architectural heritage.

Decades ago, Leonard Vincent, Stevenage Development Corporation’s chief architect and planner, described the town like this: “Around the square and central pedestrian way the buildings are constructed with a pre-cast reinforced concrete frame and clad in steel, glass, stone, exposed stone aggregate panels, mosaics, tiles and brick.”

The concrete-dominated approach was once seen as cutting-edge, but in recent decades that’s not been the case, and as the first New Town, the majority of central spaces and amenities were built at the same time, meaning they’ve aged similarly, leaving buildings and streets feeling tired and in need of investment. Stevenage is also not immune from the wider challenges affecting town centres.

“We’ll be following the principle of less is more, aiming for minimal ‘street clutter’ with uniform materials and colour palettes”

The single biggest scheme in the 20-year regeneration project is being led by Mace in partnership with Stevenage BC. Called SG1, the £350m project will include the creation of 11 new buildings, five new, distinct character areas and a series of streets and thoroughfares designed to improve connectivity and accessibility across the town. There will be a shared facility containing health, voluntary, charity and council services.

Although this may seem like a traditional regeneration programme, in Stevenage – as always – we’re doing things slightly differently. As well as improving facilities for residents, we’re also placing a major focus on architecture, and making the most of our status as the first New Town.

While Stevenage’s distinct architecture and design may not be to everyone’s taste, it is iconic and not something that should be cast aside. Rather than making a clean break from the heritage that has put Stevenage on the map, we’re reinvigorating it, restoring traditional buildings with a modern flourish. 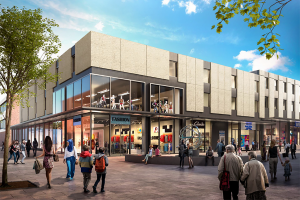 The decision to continue to follow the architectural heritage of the original New Town has been deeply embedded into the earliest inception of the Stevenage Central Framework upon which all regeneration programmes are based. These principles have fed into designs for our campaigns and can be seen clearly in the images our developers have produced and the schemes currently under way. The creation of this plan then led to the development of a local plan which outlined the value of this approach.

The local plan and associated framework had some challenges, including conservation areas and listed structures in central spaces that have proved, in some cases, to be a difficult obstacle to overcome.

We have heeded the guidance of groups like Historic England and are working with them to find a solution that maximises the potential of our central spaces while recognising the importance of these protected structures and entities.

The designs for the next stage of the town are not quite as starkly geometric as those Leonard Vincent described, but the new developments – particularly in the town square – take advantage of the existing structures and frontages. The new paving, being installed this autumn as one of the first stages of the project, will align with these initial designs.

Our new layout will express characteristic modern principles and will establish the function of the area through a minimal approach to design aimed at facilitating public life. As in the last century we’ll be following the principle of less is more, aiming for minimal ‘street clutter’ with uniform materials and colour palettes being used to accent the dark tiling that currently surrounds some of our key ­features like the fountain, clock tower and iconic ‘Joyride’ statue that have been a part of the town for decades. 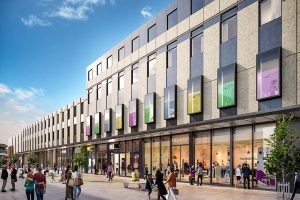 The developments will feature more rectangular and square shapes, following and echoing the initial style of the New Town, along with landscaping and artwork enabling a functional design of asymmetrical composition that’s typical of Modernist town centres.

We’re working with the brands and outlets here to ensure that any additional work that is carried out by private tenants also follows the style we have agreed, and the designs we have proposed clearly echo the initial Brutalist style. Looking further down the line, we’re also looking to feed in some of the artistic heritage of the town by including work from artists like ­Franka Belsky, Henry Moore and Piet Mondrian, whose work formed a key part of the early development of the town centre.

Initial discussions mooted positioning Stevenage as a tourist destination. While this may seem like a distant dream, it is not that far from reality. The town is the first ­example of New Town architecture and has plenty to boast about, not least that more than a quarter of the satellites currently ­orbiting Earth were built at its Airbus facility. However, in the shorter term the central focus is to transform Stevenage into a place where people once again want to live, work and enjoy.

The strategy of celebrating the heritage of the New Town has, to date, been a popular one and we’ve received strong commitments from businesses and retailers based here which have welcomed plans to increase footfall, regenerate the town and provide a better platform for further investment. There has, of course, been a degree of scepticism, as there is with any major campaign like this, and particularly in a town where regeneration has been promised before. However, the vast majority of residents and businesses have been very positive, and more than 3,000 people have come to the visitor centre we set up to communicate the changes.

Stevenage holds an important position both as the first New Town and at a wider, national level, and we must celebrate what makes our town unique, and be proud of the place we live and work in.